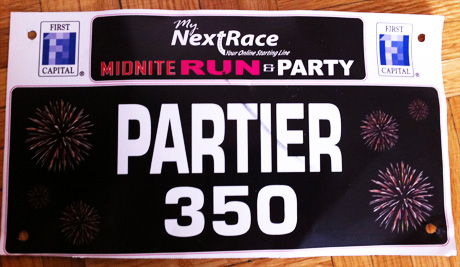 To say goodbye to 2013 and ring in 2014, Stella and I decided to participate in the Toronto Midnite New Year’s Eve Run – a freezing 5km race around Liberty Village starting at the strike of midnight! We both called in on the morning of NYE to register ourselves for the race. It was $95+tax to do the run and get some goodies and a party ticket.

Before the Run
We got off the subway at King station (free rides on the TTC after 7pm for NYE – yay!) and took the 504 streetcar west to Jefferson Avenue. From there, the Market Bistro was a one-block walk. We arrived around 11:15pm, and due to a combination of lots of last-minute race-kit pick-ups and lack of organization (despite having registered already, my friend wasn’t on the runners list and had to be assigned a new bib and time chip), Stella and I made it to the start line before midnight with only seven minutes to spare.

We checked in our coats and swagbag at the Danceology studio. This is the most goodies I’ve ever gotten in a swagbag from a race :O

The atmosphere at the start line was great! Despite the -10°C temperature, being amidst the crowd of runners kept us relatively okay. The organizer hyped us up at the front of the line while a television crew from CP24 filmed the event. Also at the front were “Rocky Balboa” and “The Banana” who would lead the whole race. There was such infectious energy and a lot of people came in creative lit up costumes. It was pretty exciting! :D We all counted down to midnight and were off (unfortunately sans fireworks, but I was so excited at this point and didn’t notice). 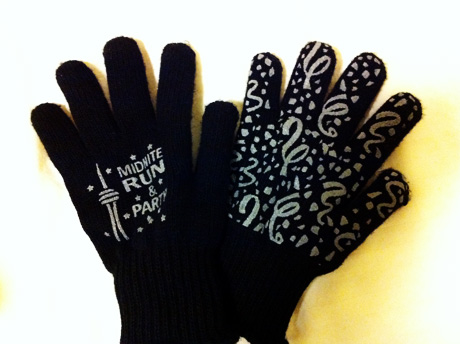 We got these gloves in addition to our goodies bag. I wore another pair of gloves underneath to help keep my hands warm during the race.

The start line! (Sorry for the blurriness – my fingers were freezing and I didn’t have the endurance to re-take the shot)

This was actually a difficult run for me because of the freezing air and the icy and dark course. I’m not used to running in the cold (and have decided I thoroughly don’t enjoy it lol) and breathing just felt like tiny daggers going through me! The snow and ice weren’t salted away for at least half of the course. Luckily I didn’t see anyone get hurt, but heard of some others slipping into potholes and the like – hopefully no one got any serious injuries. In terms of scenery, there wasn’t much to see, partly because it’s so dark and partly due to the course itself. 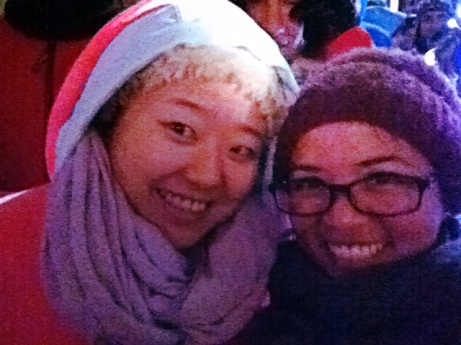 The volunteer marshals on the course were super friendly and supportive! However, there was a lot of confusion on the course and no distance markers. I was really surprised to see the finish line so soon. I finished around 27:30 but don’t think I actually ran the whole distance – it takes me about 30 minutes to run a good 5k, and I was going so slowly over the ice at a lot of points that I was expecting to finish at least 10-15 minutes after. Ah well, I guess. :/ Even though it’s a competitive race, I treated it as more of a fun run and it was still a new and exciting experience.

After the Run
We originally missed the person handing out medals at the finish line and had to go back. We then had a long wait in line for bag/coat check and our post-run meal: one glass of champagne + a can of beer, a sandwich, and soup. You could tell a lot of the volunteers were stressed out and working hard coping with all of the mishaps of this event. We didn’t stay long after our meal but there were a few people at the after-party chatting and listening to the music. Reviews and ratings here seem to indicate the race was better prepared for in its previous two years, so I’m not sure what happened this year. Nonetheless, even though I don’t think I’d do this race again, it’s an exciting way to start the new year and I’m glad I did it once!

Such a pretty medal!