I stopped by for lunch with a friend at Burrito Bandidos (496 Yonge Street), a short walk just north of College station. Our go-to post-workout spot is usually Big Fat Burrito – also an awesome and affordable burritos place – but we decided to venture out a little to a place with a few more options.

The halibut burrito (only available in large) is apparently the burrito option to try, and I opted to get the mixed shrimp/halibut. 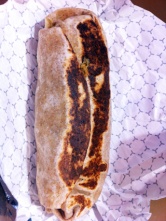 Gosh it was delicious. The large burrito is also pretty much two meals for me. I had it served with all of the toppings: Mexican rice, lettuce, jalapeños, refried beans, tomatoes, green onion, guacamole, cheese, green pepper, and cilantro. The sauces include: salsa, burrito sauce, sour cream, and hot sauce. The wait was a little long but it was definitely worth it and my friend and I were so satisfied. The burrito was completely stuffed with deliciousness and was not at all stingy with the halibut and shrimp. I loved this burrito hot and fresh out of the kitchen and even half-eaten and room-temperature several hours later.