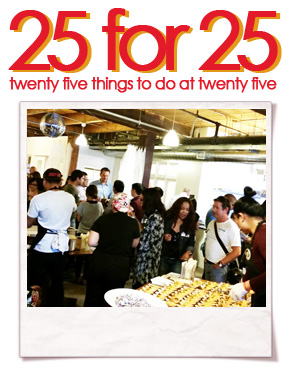 NextDayBetter is a cultural platform of “big-idea workers, amazing workdoers and changemakers” coming together to share their stories and spread their ideas and actions. Its first time hitting up Toronto, this speaker series particularly highlights the Filipino diaspora and it looks like its network just keeps growing and growing! The event theme for #ndbTO was Batman, Foodies, Fashion + CrisisMaps.

I first learned about NDB recently while I’ve been interning at Kapisanan Philippine Centre for Arts & Culture. I could see a lot of social media preparation happening for the event and decided to volunteer for the night of.

I’m glad I did. I met a lot of great people all hungry for some good food and great inspiration. :)

The event was held at the Centre for Social Innovation Annex (CSI) which was a really nice space for an event like this. Having only an hour to set everything up, preparations went well and guests were welcomed by our friendly registration table, a display of VINTA clothing, and performance from Pantayo, a kulintang ensemble.

Food is generally my favourite part of any event, and it was pretty amazing here. Free appetizers came from Lamesa Filipino Kitchen, Salo, Kanto by Tita Flips, Tocino Boys, and Lola’s Kusina. The Well Bar was also present and even concocted a cocktail specifically for this event! 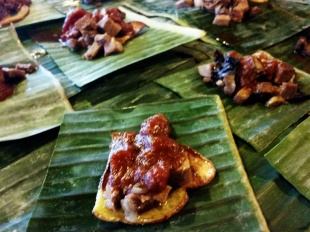 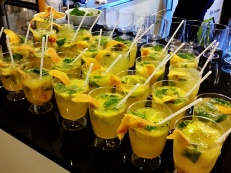 There was nothing I didn’t enjoy, though the ube (purple yam) crinkle cookies and lengua estofado (ox tongue with tomato sauce) in particular had a hold on my heart. I had only been familiar with Lamesa before this event – definitely need to have a sit-down meal at all these other places soon!

Time for the main event! The place was absolutely packed with people looking to hear from the four speakers and enjoy the performances. The event ran longer than anticipated and unfortunately I had to duck out and head home early, but I had such a blast.

Francis Manapul, New York Times best-selling comic book writer and artist for The Flash and Batman, talked about his childhood and path to becoming the writer and artist he is today. He talked about inspiration and what it means to be a hero, as well as little boy who once told him that his favourite hero was The Flash, not because he was the fastest man alive, but because he would ‘always try’. He also had a small Flash shirt that he gave to a little girl in the audience. 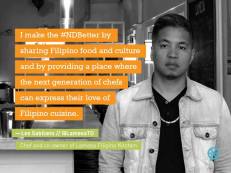 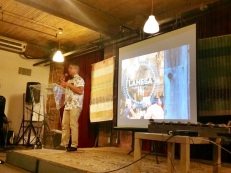 Les Sabilano is co-owner of Lamesa Filipino Kitchen along with Chef Rudy and talked about the lack of presence Filipino food ha(d) in the city and wanting to change that. Filipinos make up one of the largest ethnic groups in the GTA; how is it that there are an endless number of dim sum and sushi places but no Filipino restaurants? He mentioned a specific moment in the show Fear Factor where the host and contestants were grossed out eating balut (duck embryo), and wanting to prove that ‘Filipino food is not Fear Factor food.’

Caroline Mangosing, founder of VINTA and executive director of Kapisanan

Caroline Mangosing, designer of Filipiñana fashion enterprise VINTA and executive director of Kapisanan, took us through a visual-historical tour of traditional formal clothing in the Philippines. She also shed some light on the painstaking process involving so many people to make a barong Tagalog and the importance of being fashion and socially conscious. During the Q&A, she called for Filipinas really owning the terno before the fashion designers on their runways do.

Heather Leson of the Humanitarian OpenStreetMap Team was the final speaker. I had to leave and unfortunately missed her talk. It really sounds like an interesting initiative for humanitarian work though, and she posted her slides though! I also very sadly missed the PSL (Poetry is Our Second Language) performances! 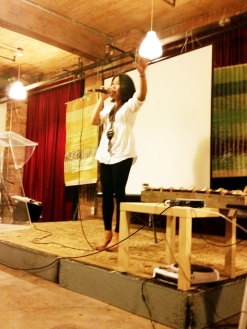 Great food, great vibes, great people. It was awesome to see such an event reach out to and bring together so many interested in Filipino culture and/or making the next day better. :)

4 responses to “#10 Volunteer at an event, festival, or organization”