I slept in until about 10am and got breakfast. A lot of people were also leaving that day (the hostel sees really fast turnover rates. I’m assuming travelers only really come to Porto as a stopover to some other destination) so the washrooms were pretty busy. People were considerate and efficient though and there were never huge line ups. I took my time before check out and finally got antsy enough to leave at 11:30am.

I got to the airport and worked on my MRP and ate a salad from Burger King. Yeah, I know, there are a lot of things wrong with that previous statement. It had just been SO LONG since I had any veggies. And whoa, these fast food chains in Europe are expensive!

I was flying Ryanair again and this was my last flight within Europe. As I lined up at the gate, a staff member checking boarding passes pointed out that I hadn’t gone to passport control (having a non-EU passport) before passing security! Ack! I completely forgot about needing to do so, even though it’s stated on the boarding pass I printed out. :( Very luckily, I got verified at the gate before I boarded, taking only a couple of minutes. There was another man there from Guinea-Bissau who had probably made the same mistake I made.

Our flight left on time and I napped for pretty much all of it. We landed in Valencia 15 minutes ahead of schedule (Ryanair making a good impression!) and I changed out of all my layers of clothes (I had been kind of paranoid about the carry-on restrictions on Ryanair and wearing layers of my clothes for these flights to make my backpack less full, lol) and went to the metro.

The ticket-buying process is really easy and straightforward, though expensive! I got a tip from the WikiTravel page on Valencia that you can walk to the next station, Rosas, for a significant discount because it’s one Zone over from the airport. But things might have ended disastrously what with my navigational skills and I didn’t want to keep my AirBnB host waiting for me.

The metro in Valencia is nice and swanky. And lime green. It’s very roomy and even has small garbage disposals near the doors. This was the only time I found myself using the metro in this city though.

Eventually, I reached Xàtiva station and exited towards the Plaza de Toros, the large bullring in Valencia. I was a little earlier than expected so walked around the area. I’m not a fan of bullfighting as a sport or entertainment, but the building itself is so majestic. 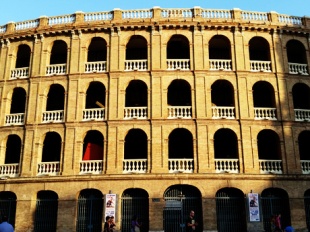 The Estació del Nord (North Train Station) is right across the street, also a grand-looking building. I thoroughly enjoyed the architecture and landscaping of all the cities I visited throughout Portugal and Spain, but Valencia might be my favourite.

I went back to the metro station exit and found my host, Javier, sitting nearby and reading. He showed me how to get to his apartment and I was given a key to the building and the apartment. I was in really comfy private room with a window and fan (it was sooooo hot here!) and even had towels provided for me. The bathroom, kitchen area, and living room were all shared. I met his girlfriend, Isabella, as I was unpacking. She didn’t speak much English but was super nice!

After I finished settling in, I decided to roam around the city a bit and find a place for dinner. I quickly noticed that a lot of places were closed, (a) because of the Spanish siesta, and (b) most locals go on vacation at this time. This would actually become a little disappointing during my stay in Valencia.

I found a supermarket (actually, the ONE supermarket I ever found open) and bought water and the following tasty treat.

I kept on wandering. I love the palm trees littering the city amidst the tall buildings.

I had looked up a couple interesting restaurants to check out on Yelp, but they were both closed. :/ I really wanted to find some awesome paella that Valencia is famous for! I ended up finding an AYCE chicken buffet dinner place for €6.50 (drinks not included). The main cook spoke enough English that I learned to give him my name and just point at pieces of meat and veggies that I wanted. The meat was mostly chicken but they also had some turkey and pork. They would cook everything and then call my name out on the PA system when my order was ready. In the mean time, there were chips and bread and salsa available for eating. 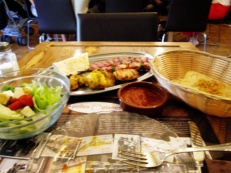 As usual, I got full faster than I would have liked, lol. I enjoyed this place though! It was a good price and just starting to get busy halfway through my meal. I walked back to the apartment afterwards to work on my MRP and plan a couple things I wanted to see in Valencia the next day.