For my birthday this year, Kevin surprised me with a trip to Mysteriously Yours Dinner Theatre, a fun and interactive whodunnit theatre show! We had talked about it back when there was a Groupon available for it, but the Groupon was no longer available by the time he booked tickets for the show on a Friday night. 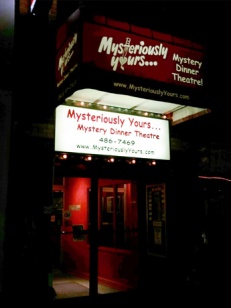 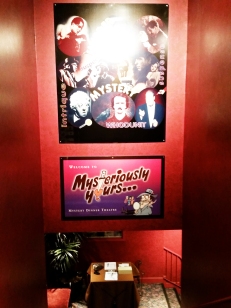 We arrived around 7:30pm, which gave us plenty of time to settle in before the actors would come out (in character). They were due to be out and about around 8pm to mingle with guests and perhaps drop a few clues. The show would officially start at 8:30pm and go for about an hour, with a break at the halfway mark. The particular show and theme for the evening was Speakeasy! A Roaring 20’s Murder Mystery.

Detective game face was on. There would be a lot of imaginary beard-stroking this evening. 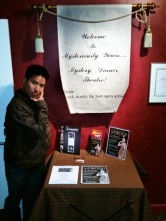 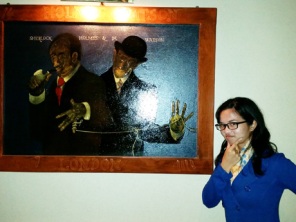 A server led us to Table 15, a table for four that we would be sharing with another reservation for two, who also turned out to be a young couple. The venue was nicely set up and we saw a lot of other guests dressed in 20’s-inspired attire.

There were pencils at the table and we got a brochure each where we could write our clues on the back to solve the mystery~ Kevin and I were kind of intense and overzealously started jotting down tons of notes before the show even started. It was unnecessary, lol. We initially even declined getting alcohol to make sure our heads were totally in the game. We did end up getting some of the house white wine for $6.50 for 6 oz. at the halfway point though. 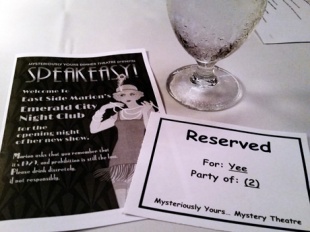 A nice thing to mention is that “Guests celebrating birthdays or anniversaries can be included in the mystery“… So when Al Capone came by our table, I was pulled aside into a private room and assigned a speaking role. It was an easy-to-remember one line rhyme: “I was a nun; now I want some fun”. Hehe. And delivered with sass! I thought I was randomly assigned this role until Kevin hinted at the halfway point that he had actually volunteered me when he made the booking. LOL. A fun feature if you’re organizing your visit here around a special surprise event! It turned out that the other girl at our table was also celebrating her birthday and her boyfriend had volunteered her to be part of the show without her knowledge, too! She was also a member of Al Capone’s posse.

Kevin and I were super into the performance and figuring out who the murderer was! At the end of the show, we were given about 15-20 minutes to cast our ballot in solving the mystery. The ballot also came with a tear-off coupon for $10 our next visit. Then there was a big reveal and the clues came together quite nicely. They gave a prize bag to five people who solved the mystery correctly, and Kevin was one of them! YAY! The bag included a tumbler and two free passes to the theatre portion of their next show! 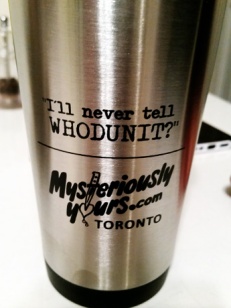 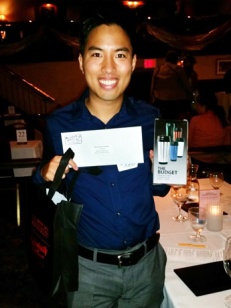 Their next show, Getting Hitched! An Engagement Party Directed by Alfred Hitchcock, is slated to start its run in January 2015. Looking forward to it! 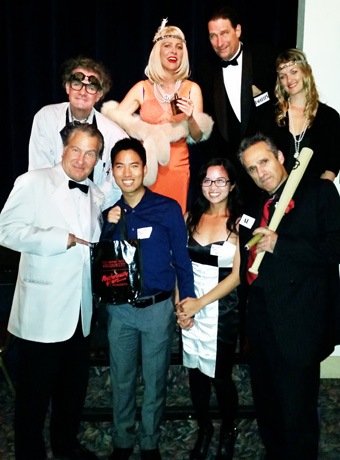 2 responses to “Mysteriously Yours Dinner Theatre”