The Christmas season is upon us. :)

Kevin and I visited the Toronto Christmas Market (#TCM14) in the Distillery District on Friday. TCM is a non-profit organization supported by public donations and many corporate sponsors. This was my first Christmas market so I was pretty excited! The weather wasn’t too cold either, so we walked from King station and arrived at Gristmill Lane around 6:15pm. It wasn’t busy at all yet, which was nice. This path included a large heart-shaped arch with a mistletoe, inflatable snowmen, and a children’s life-size gingerbread house. The gingerbread house is unfortunately NOT made out of real gingerbread, but we did get to try some candy-cane flavoured oreos! 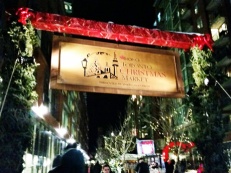 Further along, we found “Santa’s house” where he took pictures with children (and pets, on Tuesdays!). There was a short queue maintained by elves. The American Express Lounge was also open, which we had to sign up for e-mails to enter. There were also porta potties further down the lane. The lounge was nice and warm, and we got free hot chocolate and chocolate coins. We enjoyed our free treats and took some pictures inside before continuing our exploration of the market. 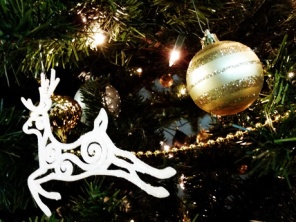 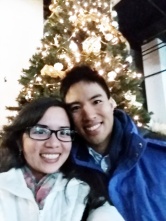 We walked by a few market stalls and found another lounge serving up warm sake Christmas cocktails! Interesting. There was also a short line-up at a Mill Street stall that was serving free beer samples pictured below. They told us that for every picture hashtagged #MillStreetMoment, they would be donating $1 to the Daily Bread Food Bank. Pretty cool! I tried the Vanilla Porter (farthest on the right), which is their seasonal offering of dark beer with a hint of vanilla. Kevin tried the one on its left, which was similar to a Guinness.

We checked out the earlier stalls we had walked by, which were selling anything from Christmas trees to beernuts to candied apples and bees wax trinkets. The stalls selling any kind of edible items were definitely the most popular. There was one near the stage and giant Christmas tree that was selling a delicious array of fudge. FYI, there is an information booth with maps at the entrance to the market on Mill Street – helpful if you’re looking for something specific in the market!

Next, we walked to the stage area (just in front of a merry-go-round and ferris wheel!) and managed to catch the 7:30pm performance of the O’Pears. We got seats around 7:20 and by 7:30, the area was crowded with standing onlookers! They harmonized a few Christmas carols and had a really lovely show. There was an 8pm show immediately afterwards by the Candy Cane Carolers, but we were starting to get cold from sitting and wanted to check out more of the market.

Before we left the area, we circled around the beautiful giant Christmas tree for some pictures. It was pretty magical. :)

By this time, we definitely noticed there were a lot more people crowding the streets of the market! We entered the large main street, Trinity Street, which was beautifully lit up. 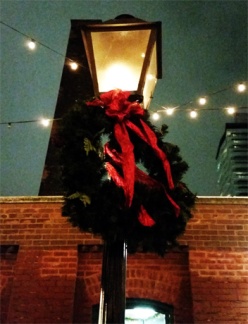 Tank House Lane, lined with a number of food stalls (artisan grilled cheese, wienerschnitzel sandwiches, among more) and more market stalls was PACKED. On the way to the end of the lane, there was a small performance promoting the movie, Into the Woods. I couldn’t hear the singer very well over crowd noise, but she managed well enough. The very end of the lane had upside down Christmastoe trees (you geddit? :D)! Back on our way closer to the beer gardens, Glad had another picture opp ready with mistletoe, and Kevin and I took a quick photo before we blocked too many people from flowing along the street.

We were getting hungry~. Kevin and I tried some mulled wine for $8, which was warm and delicious. Definitely perfect for the Christmas season! We planned on having a sit-down meal somewhere in the district, but we were encountering more and more people with enormous turkey legs. We knew it would be really expensive as food items in these markets tend to be, but we were still intrigued. We saw more and more of these turkey legs, and eventually we saw chalkboard signs pointing us to them, too! Turkey legs were a whopping $12 apiece. Kevin asked another couple eating a leg and poutine if they thought it was worth it, and they were so enthusiastic about it we ended up getting one for ourselves. We stood next to an outdoor heater and it actually took us a while to finish! I have to say though, after having a few bites, Kevin and I both felt like it didn’t really look or taste like turkey! It was more hammy to me. Yummy though, and despite all the ligaments, we feasted like old kings and finished our dinner. It was actually enough to satisfy us for the next few hours. 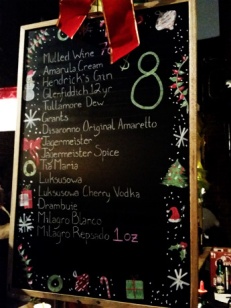 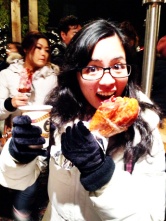 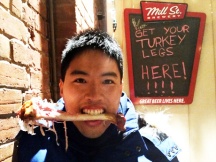 I definitely had a great time and just loved the Christmas-ness of everything. Kevin and I spent a good three hours here; we left just after 9pm when things were starting to close, though the streets were still pretty full and most stalls were still open, some still busy! There’s still time to check it out this year: it runs from November 28 to December 21 (that’s this upcoming Sunday!). The market is open on Tuesday to Friday 12pm to 9pm and on Saturday and Sunday 10am to 9pm.